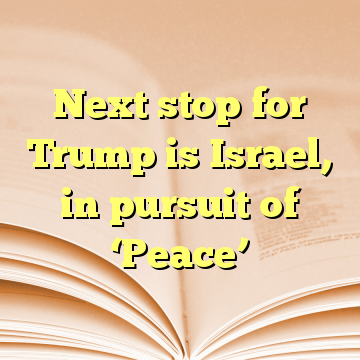 (Worthy News) – President Donald Trump has cast the elusive pursuit of peace between Israelis and Palestinians as the “ultimate deal.” But he will step foot in Israel having offered few indications of how he plans to achieve what so many of his predecessors could not.

On the eve of Trump’s visit, Prime Minister Benjamin Netanyahu’s Security Cabinet approved several confidence-building measures, including construction permits for Palestinians near their cities in parts of the West Bank that had previously been off limits, a senior official said. Under interim agreements 60 percent of the West Bank, known as Area C, site of Israel’s settlements, is under Israeli control and Palestinian development there has mostly been forbidden by Israel.

Speaking on condition of anonymity in line with protocol, he said the package also includes economic concessions and opening the border crossing between the West Bank and Jordan. [ Source ]

Saudi King Salman told U.S. President Donald Trump during their meeting in Riyadh on Saturday that he is convinced in Trump’s ability to make progress toward reaching a peace deal between Israel and the Palestinians, Saudi Foreign Minister Adel al-Jubeir said during a press conference with his U.S. counterpart, Rex Tillerson. The Saudis, Jubeir added, are willing to help.

Jubeir noted that the peace process between Israel and the Palestinians is one of the central issues the two discussed during Trump meeting with King Salman bin Abdulaziz al-Saud. [ Source ]

Netanyahu: I will discuss ‘ways to advance peace’ with Trump

Prime Minister Benjamin Netanyahu on Sunday said Israel was welcoming US President Donald Trump “with open arms,” adding that he will “discuss ways to advance peace” with the US leader during his Israel visit on Monday-Tuesday.

“Mr. President, we look forward to your visit. The citizens of Israel will receive you with open arms,” Netanyahu said at the start of the weekly cabinet meeting.

“I will discuss with President Trump ways to strengthen even further the primary and strongest alliance with the US. We will strengthen security ties, which are strengthening daily, and we will also discuss ways to advance peace,” he said. [ Source ]