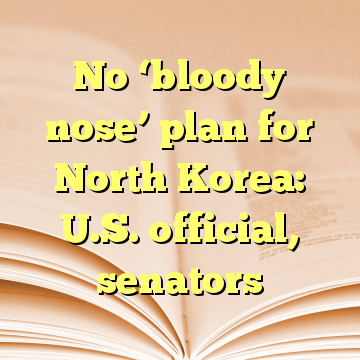 (Worthy News) – The senior U.S. diplomat for Asia, Susan Thornton, said on Thursday she understood the Trump administration had no strategy for a so-called bloody nose strike on North Korea, but Pyongyang would be forced to give up its nuclear weapons “one way or another.”

President Donald Trump’s administration says it prefers a diplomatic solution to the crisis over North Korea’s development of nuclear missiles capable of hitting the United States.

But U.S. officials have told Reuters and other media that Trump and his advisers have discussed the possibility of a limited strike on North Korea that would neither knock out its program nor overthrow leader Kim Jong Un’s government. [ Source: Reuters (Read More…) ]