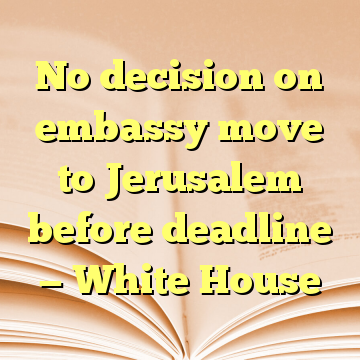 (Worthy News) – The White House confirmed Monday that US President Donald Trump would let a deadline on signing a waiver to delay moving the US Embassy from Tel Aviv to Jerusalem pass without signing a new one, though it was not clear if an actual policy shift was in the offing.

A spokesperson for the Trump administration confirmed the president would not sign the six-month waiver by its Monday deadline.

“No action though will be taken on the waiver today and we will declare a decision on the waiver in the coming days,” Hogan Gidley said. [ Source: Times of Israel (Read More…) ]