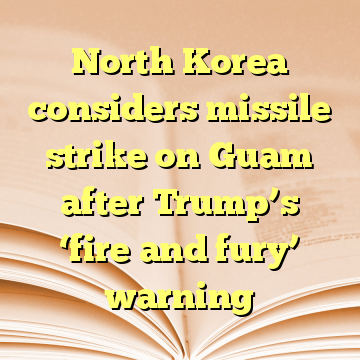 (Worthy News) – North Korea said on Wednesday it is considering plans for a missile strike on the U.S. Pacific territory of Guam, just hours after President Donald Trump told the North that any threat to the United States would be met with “fire and fury”.

The sharp increase in tensions rattled financial markets and prompted warnings from U.S. officials and analysts not to engage in rhetorical slanging matches with North Korea.

Pyongyang said it was “carefully examining” a plan to strike Guam, which is home to about 163,000 people and a U.S. military base that includes a submarine squadron, an airbase and a Coast Guard group. [ Source: Reuters (Read More…) ]