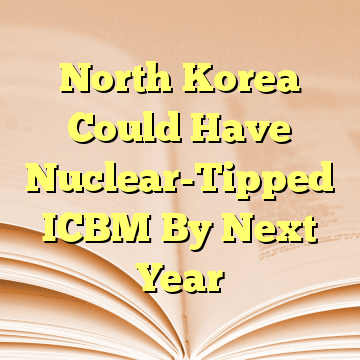 (Worthy News) – The Defense Intelligence Agency now estimates that North Korea could have an ICBM with a nuclear warhead capable of hitting the U.S. mainland by next year, The Washington Post reported Tuesday.

The estimate by the DIA significantly shortened the timeframe for when North Korea could develop the technology for miniaturizing a nuclear warhead to fit atop an Intercontinental Ballistic Missile (ICBM) and survive re-entry into the atmosphere. Previous estimates said that North Korea was at least three years away from having the capability.

The new confidential assessment by the DIA followed the July 4 missile test that North Korea claimed was an ICBM. U.S. Pacific Command initially said the missile appeared to be of intermediate range but later concluded that it had the range of an ICBM capable of hitting Alaska. [ Source:Defense Tech (Read More…) ]