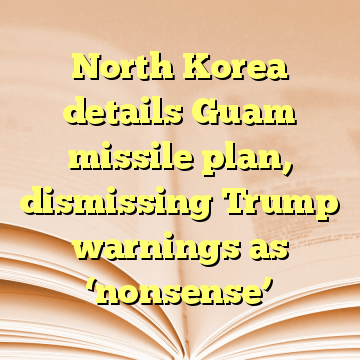 (Worthy News) – North Korea dismissed warnings by U.S. President Donald Trump that it would face “fire and fury” if it threatened the United States as a “load of nonsense” and outlined detailed plans on for a missile strike near the U.S. Pacific territory of Guam.

Experts in South Korea said the plans unveiled by Pyongyang ratcheted up risks significantly since Washington was likely to view any missile aimed at its territory as a provocation, even if launched as a test.

North Korea’s apparently rapid progress in developing nuclear weapons and missiles capable of reaching the U.S. mainland has fueled tensions that erupted into a war of words between Washington and Pyongyang this week, unnerving regional powers and global investors. [ Source (Read More…) ]