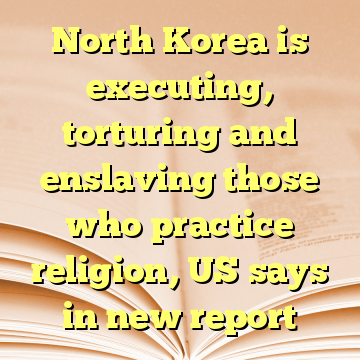 (Worthy News) – The North Korean regime has continued to position itself as one of the world’s worst persecutors of the religious, torturing and killing people who practice their faith, according to a State Department report released Tuesday.

The 2016 Annual Report on International Religious Freedom determined that the government led by dictator Kim Jong Un continues to delineate brutal punishments for those who engage in faith-bound acts outside of worshipping the country’s leadership. The punishment includes “executions, torture, beatings and arrests.”

“An estimated 80,000 to 120,000 political prisoners, some imprisoned for religious reasons, were believed to be held in the political prison camp system in remote areas under horrific conditions,” the report stated. [ Source (Read More…) ]