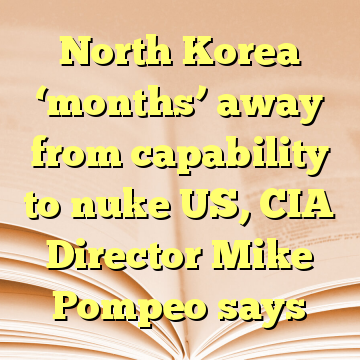 (Worthy News) – North Korea could acquire the ability to deliver a nuclear weapon to the United States within “months,” a top American spy official said Thursday.

“It is the case that they are close enough now in their capabilities that from a U.S. policy perspective, we ought to behave as if we are on the cusp of them achieving that objective,” Pompeo said during a question-and-answer session hosted by the Foundation for Defense of Democracies.

“When you’re now talking about months, our capacity to understand that at the detailed level is in some sense irrelevant,” he said. “Whether it happens on Tuesday or a month from Tuesday, we are at a time where the president has concluded that we need a global effort to ensure that Kim Jong Un doesn’t have that capacity.” [ Source: Washington Examiner (Read More…) ]