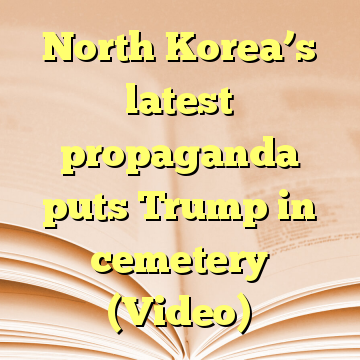 (Worthy News) – President Trump is pictured looking out over a Guam graveyard cluttered with crosses in a photoshopped image from the newest propaganda film — and grim warning — from North Korea.

The regime followed the video with a statement posted through its KCNA news agency, saying Trump “spouted rubbish” and frequently tweeted about “weird articles of his ego-driven thoughts” and attacking South Korea’s “puppy-like” Defense Minister Song Young-moo for “pinning hope on that mad guy.”

But the picture of a graveyard believed to be in Guam may be the most rattling in the video, given dictator Kim Jong Un’s repeated threats to strike the U.S. territory with a missile. The video also features Vice President Pence engulfed in flames. [ Source (Read More…) ]