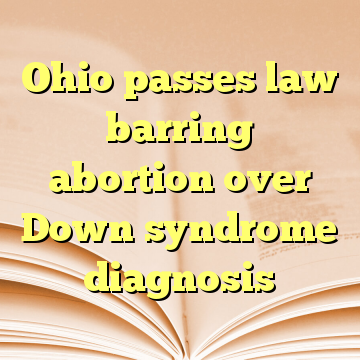 (Worthy News) – Women in Ohio would be prohibited from receiving abortions because of a fetal Down syndrome diagnosis under a bill that passed the state senate on Wednesday and is heading to Republican Governor John Kasich’s desk.

Lawmakers voted 20-12 in favor of the law, which criminalizes abortion if the physician has knowledge that the procedure is being sought due to a diagnosis of Down syndrome, a genetic disorder caused when abnormal cell division results in an extra full or partial copy of chromosome 21.

Doctors would lose their medical licenses in the state and face a fourth-degree felony charge under the law if they were to perform an abortion with that knowledge. Mothers would not face criminal charges. [ Source: Reuters (Read More…) ]