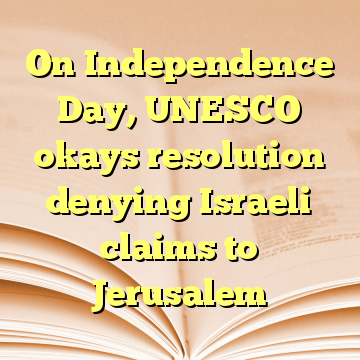 (Worthy News) – The United Nation’s cultural body on Tuesday passed the latest in a series of resolutions that denies Israeli claims to Jerusalem, in a move both forcefully condemned by Israel and touted as a diplomatic feat due to the growing number of countries that opposed it.

Submitted to UNESCO’s Executive Board by Algeria, Egypt, Lebanon, Morocco, Oman, Qatar and Sudan, the resolution on “Occupied Palestine,” which indicates that Israel has no legal or historical rights anywhere in Jerusalem, had been expected to pass, given the automatic anti-Israel majority in the 58-member body.

The vote, which coincided with Israel’s Independence Day, passed with 22 countries in favor, 23 abstentions, 10 opposed, and the representatives of three countries absent. [ Source ]