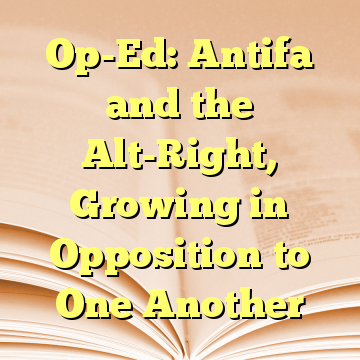 (Worthy News) – There is a cancer in the body politic. We must cut it out, or be destroyed.

None of this is new, of course. The Left has engaged in identity politics since the 1960s and engaged in heavy violence in the late 1960s and early 1970s. The white-supremacist movement has been with us since the founding of the republic. But both movements had been steadily shrinking until the last few years.

Now they’re growing. And they’re largely growing in opposition to one another. In fact, the growth of each side reinforces the growth of the other: The mainstream Left, convinced that the enemies of social-justice warriors are all alt-right Nazis, winks and nods at left-wing violence; the right, convinced that its SJW enemies are focused on racial polarization, embraces the alt-right as a form of resistance. Antifa becomes merely a radical adjunct to traditional Democratic-party politics; the alt-right becomes merely a useful tool for scurrilous Republican politicians and media figures. [ Source (Read More…) ]