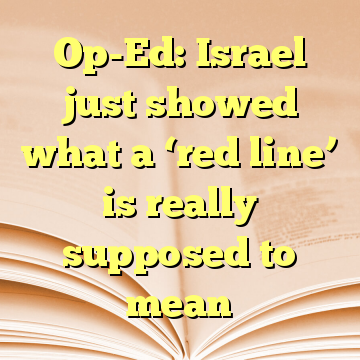 (Worthy News) – A red line’s a red line. That was Israel’s message Wednesday, when it struck a major Syrian arms facility from the air.

Jerusalem officials declined to comment for the record, but Syrian and Lebanese media reported that the Israeli Defense Force struck a major missile and military research facility at Masyaf, Syria, that’s controlled by President Bashar al-Assad and his Iranian co-conspirators.

The daring attack carried all the hallmarks of Israel’s unique brand of non-proliferation enforcement. In an age of major proliferation crises, that method should be studied carefully and emulated when possible.

Wednesday night’s strike was “not routine,” tweeted Amos Yadlin, the director of Tel Aviv University’s Institute for National Security Studies. “It targeted a Syrian military-scientific center for the development and manufacture of precision missiles” that also “produces the chemical weapons and barrel bombs that have killed thousands of Syrian civilians.” [ Source (Read More…) ]