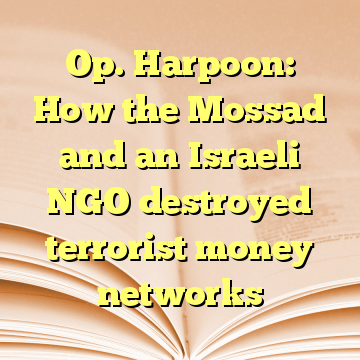 (Worthy News) – Former government sources have told The Jerusalem Post that Israel’s Operation Harpoon, carried out by a range of Mossad, Shin Bet and other operatives, was revolutionary in that it was “not just about following the money, but about destroying terrorists’ money networks.”

Sources who had close personal contact with Meir Dagan (1945-2016) indicate that the idea of elevating the thwarting of terrorism financing to a primary mission of intelligence agencies was an uphill battle for the legendary Mossad chief and Harpoon founder.

“When Dagan started Harpoon as part of his role at the National Security Council, no one was interested. Not the Mossad, Shin Bet, IDF intelligence…, and there was almost nothing in place to combat terrorism financing,” the sources told the Post.