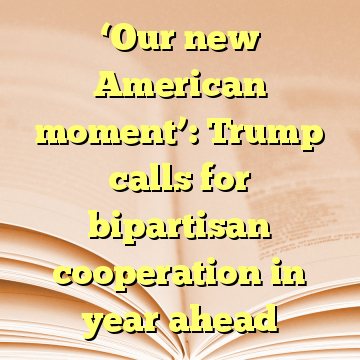 (Worthy News) – President Trump marked his first State of the Union address Tuesday with a call for concrete bipartisan achievements in the year ahead, using the momentous occasion to unveil an expansive infrastructure plan aimed at improving rural landscapes and major U.S. cities, while also emphasizing his desire for the swift enactment of immigration reform.

Like the substance of his speech, Trump maintained a measured and optimistic tone. He mentioned some of the problems that arose during his first year in office, like the GOP’s failure to repeal Obamacare, promised to avoid repeating “the same mistakes” of previous administrations when it comes to comes to countering North Korea’s aggression, and promised to check more items off his agenda over the next several months and ensure Americans’ safety.

“Tonight, I call upon all of us to set aside our differences, to seek out common ground, and to summon the unity we need to deliver for the people — this is really the key — who we elected to serve,” Trump said, eliciting applause from those gathered in the House chamber. [ Source: Washington Examiner (Read More…) ]