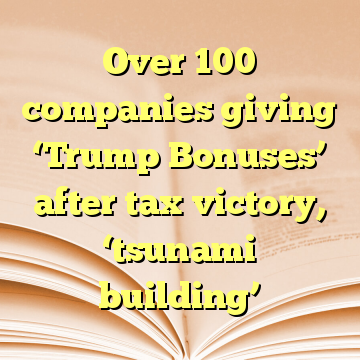 (Worthy News) – The number of companies offering employee bonuses, pay hikes, and increases in benefits in reaction to President Trump’s December tax reform victory is now over 100, with thousands of workers impacted and charities too.

Less than a day after Americans for Tax Reform put out an initial list of 40, it jumped to 52 as more company plans poured in.

And by the end of today, ATR’s John Kartch told Secrets that the list will hit over 100. “Small businesses from across the country are sending me news of their tax-cut bonuses, wage hikes, and charitable donations. Many of these were only announced internally. There is a broad and deep tsunami building,” added Kartch, ATR’s vice president of communications. [ Source: Washington Examiner (Read More…) ]