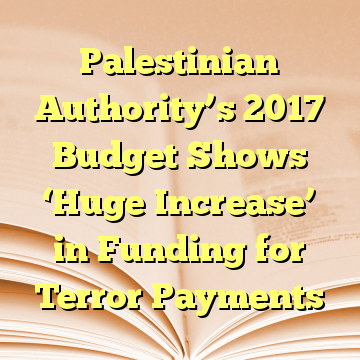 (Worthy News) – The Palestinian Authority’s 2017 budget shows a “huge increase” in the funding of salaries for imprisoned terrorists and the families of “martyrs,” an Israeli research institute revealed on Wednesday.

According to Palestinian Media Watch (PMW), the amount of money allocated by the PA for payments to terrorists jailed in Israel rose 13% this year to $158 million — compared to $135 million in 2016. During the same time frame, disbursements for family members of dead terrorists increased by 4% — to $197 million from $183 million.

Overall, PMW said, the PA is spending $355 million this year on the direct funding of terrorism. [ Source:Algemeiner (Read More…) ]