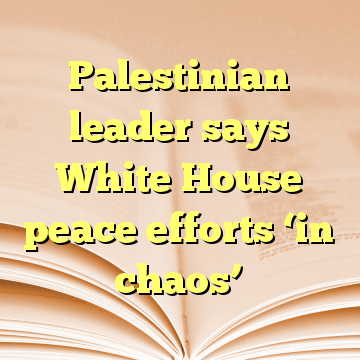 (Worthy News) – Palestinian Authority President Mahmoud Abbas said on Sunday that the entire administration of US President Donald Trump is in “chaos,” and indicated that the White House disarray was affecting peace efforts.

“I don’t even know how they are dealing with us, because his entire administration is in chaos,” Abbas told a delegation of dovish Israeli lawmakers visiting Ramallah.

Abbas told parliamentarians from the Meretz party that he had met with US officials more than 20 times since Trump’s election in November 2016, yet still had little idea what their plans for peace negotiations were. [ Source (Read More…) ]