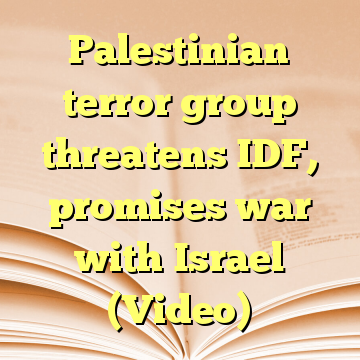 (Worthy News) – The military wing of the Popular Front for the Liberation of Palestine, an organization that orchestrated terrorist attacks that killed scores of Israelis over the years and has been classified by both the United States and the European Union as a terrorist entity, released on Tuesday a threatening video against the Jewish state and in particular its army.

The video depicts IDF vehicles moving along the security barrier between Israel and the Gaza Strip, and as one vehicle emerges a text appears in Arabic and in Hebrew on the screen saying: “In the line of fire.”

The video also shows Palestinian snipers aiming their weapons at Israeli combat engineering units that operate in the area in order to ensure the safety of other military units as well as uncover terror tunnels being dug into Israeli territory with the intent of harming the country’s population. [ Source: Jerusalem Post (Read More…) ]