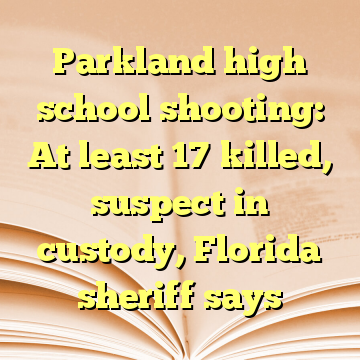 (Worthy News) – A shooting at a high school in Parkland, Florida, killed at least 17 people, stunning the town and much of the nation, as investigators raced to find a possible motive behind the bloodbath.

The suspect was identified as 19-year-old Nikolas Cruz, a former student at Marjory Stoneman Douglas High School who’d been expelled for disciplinary reasons, Broward County Sheriff Scott Israel confirmed during an evening news conference. Sen. Bill Nelson told Fox News that Cruz was wearing a gas mask and may have had smoke bombs during the rampage.

Of the 17 people killed, 12 of them died in the school, two were killed outside, one died on the street and another two died at the hospital, Israel said. He added that 15 people were transported to the hospital. [ Source: Fox News (Read More…) ]