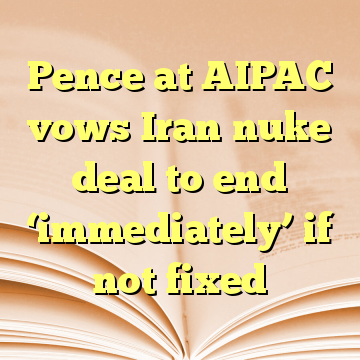 (Worthy News) – US Vice President Mike Pence vowed the US would withdraw from the nuclear deal forged between Iran and six world powers in the coming months unless lawmakers move to fix the agreement, and called US President Donald Trump the most pro-Israel president the country has ever had.

Speaking to the annual policy conference of pro-Israel lobby AIPAC, Pence also hailed the recognition of Jerusalem as Israel’s capital and said a peace proposal being crafted by the administration would not compromise on Israel’s security, in a speech heavily borrowed from an address he gave to the Knesset in January.

Speaking after US Ambassador to the UN Nikki Haley, who received a raucous reception, a more toned down Pence said Trump had signed waivers extending sanctions relief to Iran to give negotiators a chance to fix the nuclear deal, but would not do so again. [ Source: Times of Israel (Read More…) ]