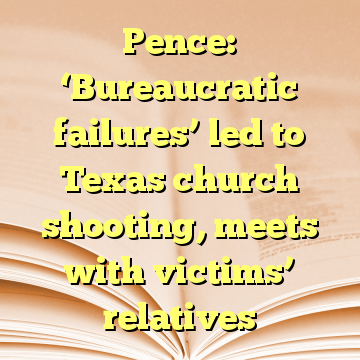 (Worthy News) – Vice President Mike Pence, visiting the Texas church where a gunman killed 26 worshippers, said Wednesday that “bureaucratic failures” contributed to the tragedy by allowing the murderer to purchase a weapon illegally.

Mr. Pence said gunman Devin Patrick Kelley committed a crime simply by buying the semi-automatic rifle that he used in the slayings Sunday at a Baptist church in Sutherland Springs. Kelley’s discharge from the Air Force on a domestic-violence court-martial was not reported to a federal database that should have prevented him from purchasing any firearms.

“He lied on his application,” Mr. Pence said of the shooter. “He had a history of mental illness, and there were bureaucratic failures. We will find out why this information was not properly reported in 2012, and we are working with leaders in Congress to ensure this never happens again.” [ Source: Washington Times (Read More…) ]