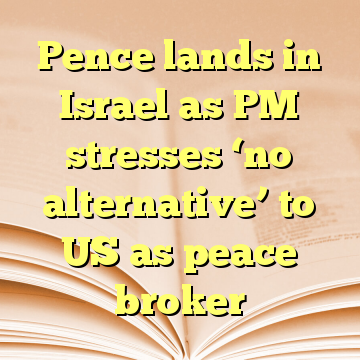 (Worthy News) – US President Mike Pence arrived in Tel Aviv Sunday evening for a two-day visit to Israel amid unprecedented tensions with the Palestinians over President Donald Trump’s recognition of Jerusalem as Israel’s capital last month.

Pence and his wife, Karen, were greeted on the tarmac at Ben Gurion Airport by Tourism Minister Yariv Levin along with a small group of dignitaries including US Ambassador to Israel David Friedman and his Israeli counterpart in the US, Ron Dermer.

Initially scheduled for December before being postponed, Pence’s visit to Israel is the final leg of a trip that included stops in Egypt and Jordan as well as a visit earlier in the day to a US military facility near the Syrian border. [ Source: Times of Israel (Read More…) ]