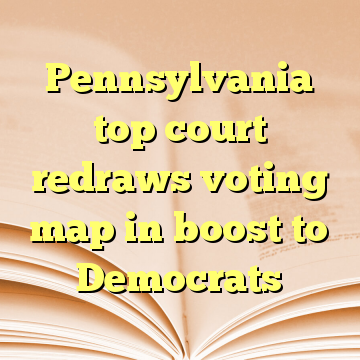 (Worthy News) – Pennsylvania’s top court on Monday unveiled a new map carving out the state’s U.S. congressional voting districts, imposing a plan it said was based on “traditional criteria” after rejecting a proposal drawn up by Republican lawmakers as unconstitutional.

The state Supreme Court had ruled that the Republican plan effectively marginalized likely Democratic voters. As a result, the Republicans have a more than 2-1 advantage in the state’s U.S. House of Representatives delegation, even though the number of registered Republicans and Democrats in Pennsylvania is roughly even.

The court-imposed plan could help Democrats who want to gain control of the U.S. Congress in the November midterm elections. [ Source: Reuters (Read More…) ]