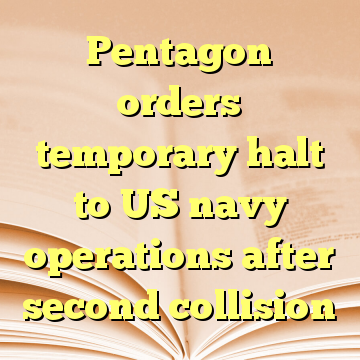 (Worthy News) – The Pentagon has ordered a temporary halt to US navy operations around the world and a full safety review, after the second serious collision in two months involving its ships in the Pacific.

Ten American sailors are missing and five injured after the guided-missile destroyer USS John S McCain collided with an oil tanker off the coast of Singapore early on Monday morning local time. Seven sailors died in June when the USS Fitzgerald and a container ship hit each other in waters off Japan, in an accident the US navy has conceded was caused by poor leadership and seamanship by senior officers.

“This is the second collision in three months and is the last in a series of incidents in the Pacific theater,” the commander of naval operations, Adm John Richardson, said in a statement. “This trend demands more forceful action.”

The McCain collision was the fourth accident the Pacific fleet has had this year. In January, the cruiser Antietam ran aground in Tokyo Bay, and in May, another cruiser, Lake Champlain, crashed into a Korean fishing boat in the Sea of Japan. [ Source (Read More…) ]