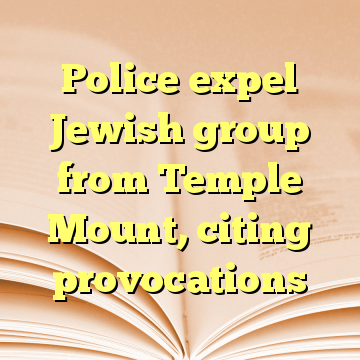 (Worthy News) – Israel Police and a group of Jewish worshipers clashed on Wednesday in the Temple Mount compound. Police said a group Jewish visitors violated the terms of the visit and created a provocation that caused a feud at the place. Videos of the incident show that Palestinians were also involved in the riots.

Police removed and detained a large group of people “in order to identify them and understand the chain of events,” according to a statement released after the incident.

Right-wing legal aid NGO Honenu said that some 40 Jewish visitors were detained in the incident. Police stressed that it is working “within a wide range of checks and balances, while keeping the law and the rules of the site, and will not allow anyone to break the law.” [ Source: Jerusalem Post (Read More…) ]