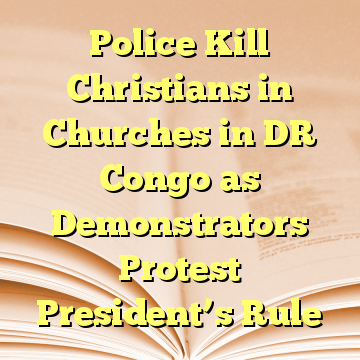 (Worthy News) – Police in the Democratic Republic of Congo allegedly opened fire and deployed tear gas inside churches on Sunday, killing at least eight Christians, and arrested more than 100 people after Christians carrying Bibles and crucifixes joined protests against the rule of President Joseph Kabila.

Eighty-two people, including priests, were taken into custody in Kinshasa, while 41 people were arrested in the rest of the vast African nation, after protests were held against President Kabila’s refusal to step down from power, AFP reported, noting that a policeman was among those killed.

The government had banned the protests under the pretext that it didn’t have the capacity to police them, and had shut down mobile phone text message and data signals for “state security” reasons, according to The Times. [ Source: Christian Post (Read More…) ]