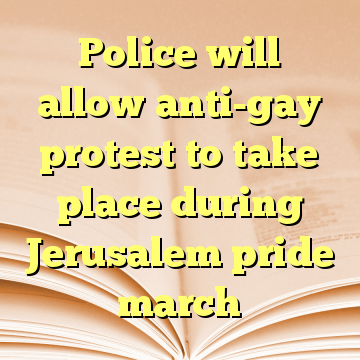 (Worthy News) – Israeli police gave permission on Sunday for the far-right Lehava organization to hold a counter-protest during Jerusalem’s pride march, due to take place on Thursday.

Police have issued warnings not to disrupt the parade to around 50 individuals in Israel and the West Bank, with some told that they cannot be in Jerusalem on the day, Israel’s Channel 2 reports.

Up to 100 members of Lehava will be permitted to protest several hundred meters away from the march, under heavy police guard. The organization plans to stand under the banner: “Do not give them children,” in reference to the recent Supreme Court ruling and subsequent protests regarding same-sex adoption reform in Israel. [ Source (Read More…) ]