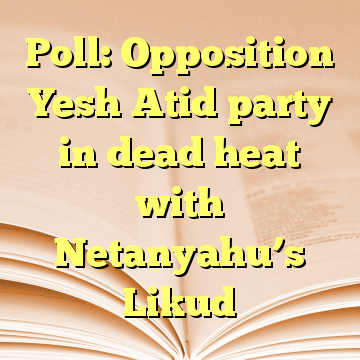 (Worthy News) – If elections were held today, the ruling Likud would be in a dead head with the opposition Yesh Atid (There is a Future) party. Each of the top two parties would receive 24 seats in the 120-seat Knesset. The center-left Zionist Union would win 17 seats, while the ultra-Orthodox Sephardic party Shas would barely makes it over the threshold at four seats.

In a survey made public on Channel 10 news on Sunday, Yair Lapid’s Yesh Atid party has strengthened considerably – more than doubling its current number of 11 Knesset members. Meanwhile, 24 seats for the Likud would mean a loss of over 20% of its mandate (down from the current 30).

As reported in the Hebrew-language Walla, Prime Minister Benjamin Netanyahu’s apparent slide and Lapid’s gain have been building steadily over the past year. Each time there was a new crisis – Israel Railway’s work on the Sabbath last year, the rash of corruption investigations involving Netanyahu that came to light at the beginning of this year, and the recent fiasco concerning the establishment of the new Israeli Public Broadcasting Corporation – Yesh Atid seemed to gain at the Likud’s expense. The current surveys showed it may surpass the Likud altogether in the not-too-distant future.. [ Source: World Israel News (Read More…) ]