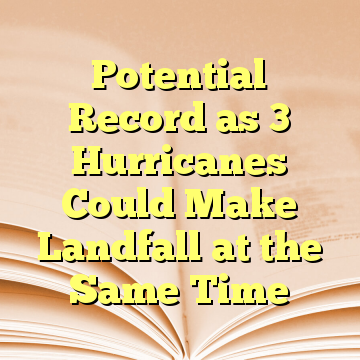 (Worthy News) – For the first time in modern history, three hurricanes in the Atlantic are lined up in the most dangerous of ways, according to Eric Blake, a hurricane specialist at the National Hurricane Center.

3 hurricanes threatening land simultaneously in the W Atlantic Basin. Never seen anything like this in the modern record #Irma #Jose #Katia http://pic.twitter.com/fSHHKxxmzk

The National Hurricane Center (NHC) has issued advisories on Hurricane Irma (currently located north of the Dominican Republic), Hurricane Jose (700 miles east of the Lesser Antilles), and Hurricane Katia (over the southwestern Gulf of Mexico).

The Atlantic experienced three simultaneous hurricanes in 2010, with Igor, Julia, and Karl all swirling in the basin at the same time. Julia never threatened land, so the NHC didn’t issue a warning for North America. This is the first time that three hurricanes have the potential to make landfall at the same time. [ Source (Read More…) ]