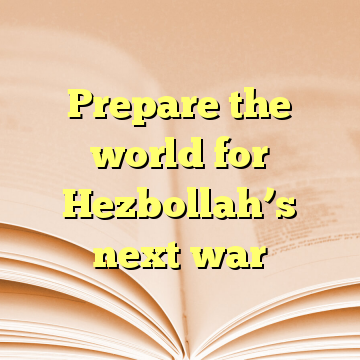 (Worthy News) – Hezbollah is Iran’s proxy, designated as a terrorist organization by the US, the EU, the Arab League, the Gulf Cooperation Council (GCC), Israel, Canada, Australia and others. The very reason for Hezbollah’s existence is to give Iran – an apocalyptic radical Islamic regime – a way to directly attack Israel, something its leader, Ayatollah Khamenei, believes is “obligatory and necessary for Muslims.”

Iran invests around $100 million a year in Hezbollah, which has enabled it to become the dominant political and military force in Lebanon with a sophisticated militia that more closely resembles a national army than a terrorist organization. It has an estimated 150,000 rockets, which is significantly more than all 29 NATO countries combined, with the exception of the US. To believe that Iran would not use this “investment” to its full potential is simply not realistic. While Iran has mobilized Hezbollah to prop up its client Bashar Assad in Syria, the original and main purpose has always been to use it as a weapon against the Jewish state.

Although there have already been several military conflicts between Israel and Hezbollah, the next one is predicted to become tremendously more devastating because of Hezbollah’s military advancements. [ Source (Read More…) ]