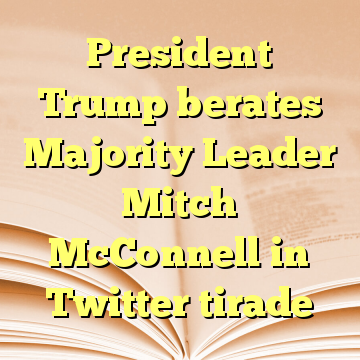 (Worthy News) – President Trump delivered a Twitter spanking to the Senate’s top Republican Wednesday, questioning why he was unable to wrangle an Obamacare repeal bill.

“Senator Mitch McConnell said I had ‘excessive expectations,’ but I don’t think so,” Mr. Trump said in an afternoon tweet from his New Jersey vacation. “After 7 years of hearing Repeal & Replace, why not done?”

Mr. McConnell has been at the helm of the Senate GOP for a decade, but most of that time was spent as minority leader, where he was successful in blunting Democrats’ agenda. As majority leader, however, he’s struggled to build majorities to pass big-ticket GOP items. [ Source (Read More…) ]