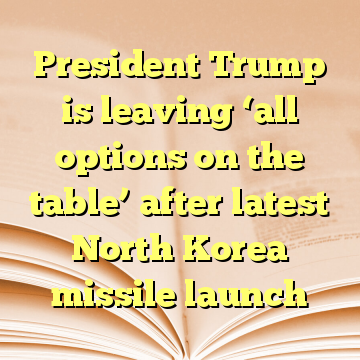 (Worthy News) – President Trump on Tuesday said that “all options are on the table” in dealing with North Korea after the country launched a missile that passed over Japanese airspace hours earlier.

“The world has received North Korea’s latest message loud and clear: This regime has signaled its contempt for its neighbors, for all members of the United Nations, and for minimum standards of acceptable international behavior,” Mr. Trump said in a statement.

“Threatening and destabilizing actions only increase the North Korean regime’s isolation in the region and among all nations of the world. All options are on the table,” the president said. [ Source (Read More…) ]