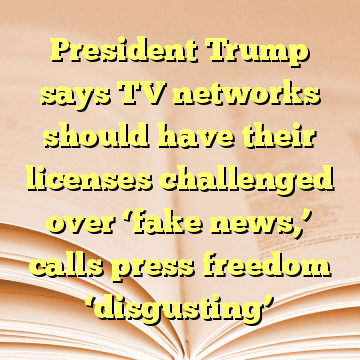 (Worthy News) – President Trump made the First Amendment his No. 1 enemy on Wednesday, calling freedom of the press “disgusting” and suggesting the TV networks he doesn’t like should lose their broadcasting licenses.

Triggered by an unflattering story from NBC News, Trump zeroed in on the network while making some of his most overt threats yet to the press. [ Source: NY Daily News (Read More…) ]

Fake @NBCNews made up a story that I wanted a "tenfold" increase in our U.S. nuclear arsenal. Pure fiction, made up to demean. NBC = CNN!

With all of the Fake News coming out of NBC and the Networks, at what point is it appropriate to challenge their License? Bad for country!

Network news has become so partisan, distorted and fake that licenses must be challenged and, if appropriate, revoked. Not fair to public!