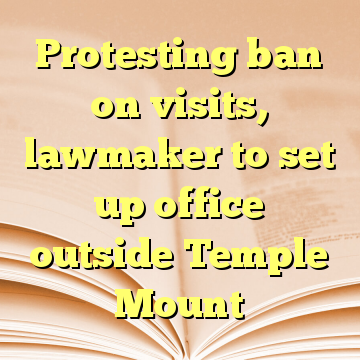 (Worthy News) – A Knesset lawmaker said Sunday he will set up his office outside an entrance to the Temple Mount in protest of an ongoing ban against MKs visiting the holy site in the Old City of Jerusalem, imposed by Prime Minister Benjamin Netanyahu.

Likud MK Yehuda Glick announced in a statement he will move his Knesset bureau to the Gate of Tribes to demonstrate against the ban that Netanyahu applied to all members of parliament a year and a half ago.

Glick will begin working in the plaza outside the gate at 10 a.m. on Monday, the statement said, and noted the historical significance of the location as the entrance used by IDF paratroopers to enter the Temple Mount when they captured the site from the Jordanian army during the 1967 Six Day War. [ Source (Read More…) ]