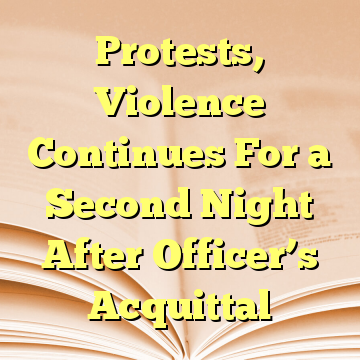 (Worthy News) – Protests near St. Louis turned violent for the second night Saturday in reaction to the acquittal of a white former police officer in the fatal shooting of a black man, as a small group of demonstrators refused to disperse, breaking windows at dozens of businesses and throwing objects at police, who moved in with hundreds of officers in riot gear to make arrests.

The confrontation took place in the Delmar Loop area of University City, a suburb about 10 miles (16 kilometers) west of St. Louis near Washington University. The area is known for concert venues, restaurants, shops and bars and includes the Blueberry Hill club where rock legend Chuck Berry played for many years.

University City had been the scene of a tense but calm march earlier in the evening to protest a judge’s ruling Friday clearing ex-officer Jason Stockley of first-degree murder in the 2011 shooting of 24-year-old Anthony Lamar Smith. That march ended with organizers calling for people to leave and reconvene Sunday afternoon. [ Source:CBN News (Read More…) ]

Acquitted St. Louis officer Stockley speaks out: ‘Feels like a burden has been lifted’

The former St. Louis police officer whose acquittal in the December 2011 shooting death of a black man sparked violent protests this weekend said his life “has been in turmoil” for some time, the St. Louis Post-Dispatch reported.

“It feels like a burden has been lifted, but the burden of having to kill someone never really lifts,” Jason Stockley, an Iraq War veteran, told the newspaper on Friday. “The taking of someone’s life is the most significant thing one can do, and it’s not done lightly…My main concern now is for the first responders, the people just trying to go to work and the protesters. I don’t want anyone to be hurt in any way over this.”

St. Louis has been hit with daily protests—which have exploded into assaults on officers, property damage and dozens of arrests—since Circuit Judge Timothy Wilson issued his ruling Friday. Stockley had waived his right to a jury trial in favor of a bench trial. [ Source:Fox News (Read More…) ]