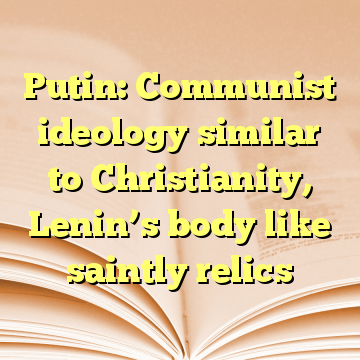 (Worthy News) – Russian President Vladimir Putin has likened communism to Christianity and Vladimir Lenin’s mausoleum in Moscow’s Red Square to the veneration of the relics of saints.

“Maybe I’ll say something that someone might dislike, but that’s the way I see it,” Putin said in an interview for the documentary Valaam, an excerpt of which was broadcast on Russia 1. “First of all, faith has always accompanied us, becoming stronger every time our country, our people, have been through hard times.

“There were those years of militant atheism when priests were eradicated, churches destroyed, but at the same time a new religion was being created. Communist ideology is very similar to Christianity, in fact: freedom, equality, brotherhood, justice – everything is laid out in the Holy Scripture, it’s all there. And the code of the builder of communism? This is sublimation, it’s basically just an excerpt from the Bible, nothing new was invented.”

Putin went further by comparing the Communists’ attitude to the Bolshevik leader Lenin to the veneration of saints in Christianity. “Look, Lenin was put in a mausoleum. How is this different from the relics of saints for Orthodox Christians and just for Christians? When they say that there’s no such tradition in Christianity, well, how come, go to Athos and take a look, there are relics of the saints there, and we have holy relics here,” Putin concluded. [ Source: RT (Read More…) ]