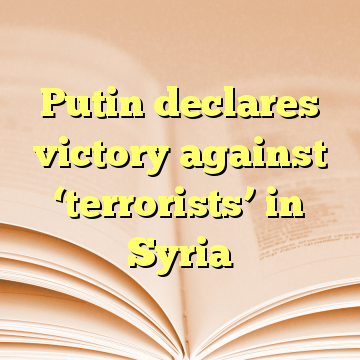 (Worthy News) – Russian President Vladimir Putin declared victory against “terrorists” in Syria on Monday during a surprise visit to a Russian military base in the county, where he also announced a partial pullout of Russian troops.

It was Mr. Putin’s first trip to Syria, where Russia launched an air campaign in 2015 that allowed President Bashar Assad’s forces to gain the upper hand against the Islamic State group as well as Syrian rebels. It was also the first visit by a foreign head of state to war-ravaged Syria since the civil war began in 2011.

Putin’s brief stop at the Hemeimeem air base in Syria’s coastal province of Latakia while en route to Egypt came days after the Russian president said he would run for re-election on March 18, and helped to show off Moscow’s global clout to the national audience. [ Source: CS Monitor (Read More…) ]