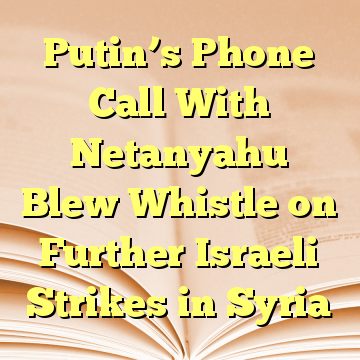 (Worthy News) – Russian President Vladimir Putin blew the whistle to stop the confrontation between Israel and Iran in Syria and both sides accepted his decision. That’s the apparent conclusion to be reached from the chain of events this past weekend.

On Saturday afternoon, after the second wave of bombardments by the Israel Air Force against Syrian targets and Iranian installations in Syria, senior Israeli officials were still taking a militant line and it seemed as if Jerusalem was considering further military action. Discussion of that ended not long after a phone call between Putin and Prime Minister Benjamin Netanyahu.

The official announcement by the Russian Foreign Ministry objected to the violation of Syrian sovereignty by Israel and totally ignored the event that provoked the eruption – the infiltration of an Iranian drone into Israeli air space. In the conversation with Netanyahu a few hours later, Putin asked him to avoid moves that could lead to “a new round of dangerous consequences for the region.” [ Source: Ha’aretz (Read More…) ]