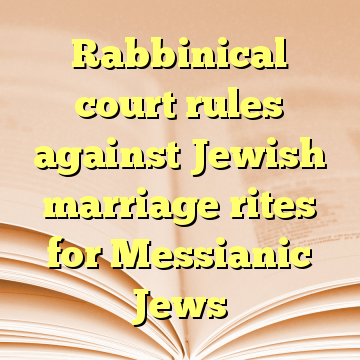 (Worthy News) – Two messianic Jews, who are Jewish by birth and who believe Jesus is God and the Messiah, and who sought to get married through the Chief Rabbinate in a Jewish ceremony, have been told by a special panel of the Tel Aviv Rabbinical Court that their beliefs put them outside of the Jewish faith and therefore they cannot get married in a religious ceremony.

The couple originally applied to marry at the Shoham Rabbinate, demonstrated that they were both Jewish from birth and requested to be registered for marriage, despite believing in Jesus as the Messiah, an idea antithetical to Jewish law and core principles of faith.

Their case was referred to the Tel Aviv Rabbinical Court to make a determination on the question in Jewish law of whether the couple’s beliefs prevent them from marrying as Jews, despite their Jewish status and heritage. [ Source (Read More…) ]