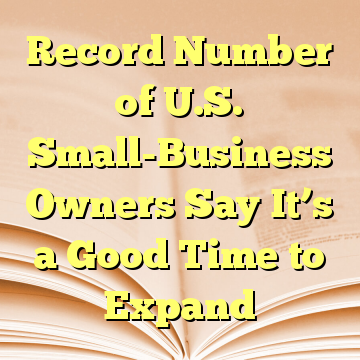 (Worthy News) – Optimism among small companies in the U.S. rose more than forecast in January, fueled by a record number of owners who said now was a good time to expand, according to a National Federation of Independent Business survey released Tuesday.

Six of the 10 components that make up the small-business optimism index increased in January, producing one of the strongest readings in the 45-year history of the survey. The figures show sustained, sturdy business sentiment since the November 2016 election. A measure of plans to boost capital spending in coming months increased by 2 points to 29 percent, consistent with other data indicating robust outlays for equipment. One in five small companies said they plan to boost hiring, unchanged from the prior month, as finding qualified workers remains problematic and underscores a tight job market. [ Source: Bloomberg (Read More…) ]