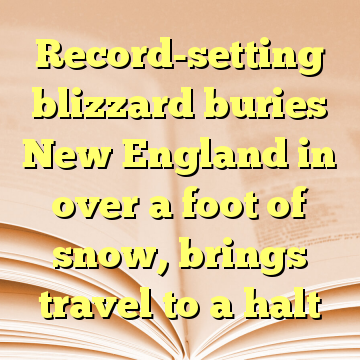 (Worthy News) – A powerful nor’easter continues to spread heavy snow and strong winds across New England with blizzard conditions bringing travel to a halt across the region.

The storm first hit the southeastern coast of the United States with heavy snow and ice on Wednesday before moving up the coast and bringing blizzard conditions to part of the northeastern U.S. on Thursday.

“An eye has developed in the storm,” AccuWeather Senior Meteorologist Alex Sosnowski said.

Powerful winds over 75 mph have been reported in coastal areas in Massachusetts, while blizzard conditions have forced airport closures in New York City. Power outages are increasing in New England and coastal areas are being inundated with severe flooding. [ Source: Accuweather (Read More…) ]