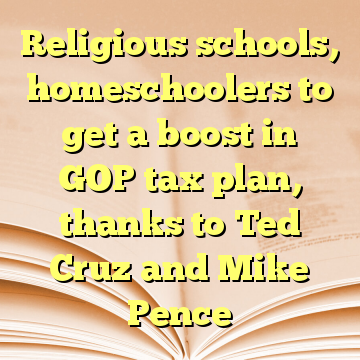 (Worthy News) – Parents would get new federal tax breaks for sending their children to private or religious schools or teaching them at home if the final Republican tax overhaul bill becomes law.

For that, they can thank Sen. Ted Cruz, R-Texas, who offered the original amendment to extend 529 college savings plans to grade school and high school, including costs for homeschooling.

Cruz’s amendment was the only one, setting aside manager’s amendments, to be added on either chamber’s floor. It passed as Republicans moved their bill through the Senate in the closing hours of Dec. 1. Cruz got an assist from Vice President Mike Pence, who cast the deciding vote in favor of the amendment after Republicans Lisa Murkowksi of Alaska and Susan Collins of Maine balked at the measure. [ Source: Washington Examiner (Read More…) ]