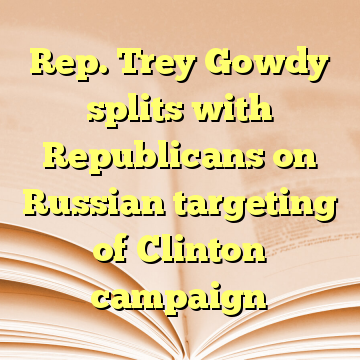 It was “clear, based on the evidence, Russia had disdain for Secretary Clinton and was motivated in whole or in part by a desire to harm her candidacy or undermine her Presidency had she prevailed,” Mr. Gowdy said in a statement Tuesday, contradicting a conclusion reached the day prior by fellow Republican committee members investigating the 2016 race.

The House panel’s Republican leadership abruptly announced the end of their probe Monday roughly a year after its members first began holding hearings in hopes of uncovering more about the U.S. intelligence community’s assessment that Russia meddled in the election to cause chaos and disrupt Mrs. Clinton’s campaign and effectively boost Mr. Trump’s. [ Source: Washington Times (Read More…) ]