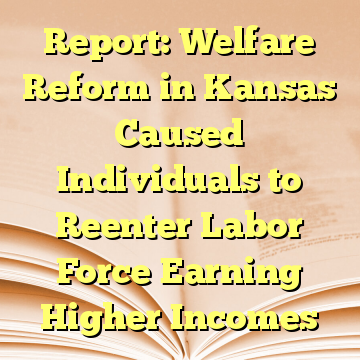 (Worthy News) – Welfare reform implemented in Kansas caused individuals to reenter the labor force while earning higher incomes, according to a report from the Foundation for Government Accountability.

Kansas Republican Gov. Sam Brownback took office in 2011 and began to implement welfare reform after the previous governor, Kathleen Sebelius, had relaxed requirements for those on welfare to work or search for employment.

From 2000 to 2011, the number of able-bodied adults on cash welfare was increasing by 42 percent in Kansas, while nationally the number on welfare had dropped by a third.

Brownback first began reforming welfare by strengthening sanctions for those who received cash assistance by implementing a three-month ban on those who refused to meet work requirements. If an individual failed to meet the requirement for a second or third time, the ban was prolonged for six months to a year. [ Source (Read More…) ]