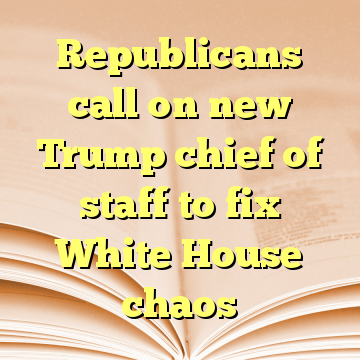 (Worthy News) – Republicans on Sunday urged President Donald Trump’s new chief of staff John Kelly to rein in the chaos within the White House on Monday but said the retired Marine Corps general will be challenged to assert control.

In his first six months in office, Trump has upended White House convention with a loose decision-making style and an open-door policy to his Oval Office for advisers, both internal and external. Infighting among his senior staff has become bitter and public.

“He’s going to have to reduce the drama, reduce both the sniping within and reduce the leaks, and bring some discipline to the relationships,” Karl Rove, a Republican strategist and former White House adviser to George W. Bush, said on “Fox News Sunday.” [ Source:Reuters (Read More…) ]