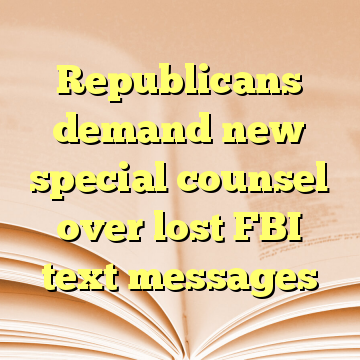 (Worthy News) – House Republicans are demanding that a second independent special counsel be convened to probe the FBI’s investigation into former Secretary of State Hillary Clinton’s use of a private email account and server.

The demands come after new revelations that the agency failed to preserve five months worth of text messages between two FBI agents who have been accused of pro-Clinton and anti-Donald Trump bias during the 2016 presidential race.

On Sunday, Sen. Ron Johnson (R-Wis.), the chairman of the Homeland Security and Governmental Affairs Committee, sent a letter to FBI Director Christopher Wray asking the agency explain what happened to the missing text messages and to provide any communications between agents Peter Strzok and Lisa Page that they might have exchanged on their personal devices and email accounts. [ Source: The Hill (Read More…) ]