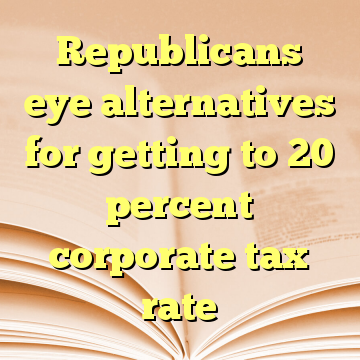 (Worthy News) – Republican lawmakers are considering indirect paths to meeting President Donald Trump’s goal of slashing the corporate tax rate to 20 percent, one of the toughest challenges they face in trying to overhaul the U.S. tax code.

Tax writers in the House of Representatives may opt to phase in the 20 percent corporate rate over three to five years by lowering it in stages from the current 35 percent, said two sources close to the tax discussions.

A phase-in surfaced as an option among Republicans on the House Ways and Means Committee as it closed in on completion of actual tax legislation, working off of a nine-page “framework” unveiled by Trump on Sept. 27. [ Source: Reuters (Read More…) ]