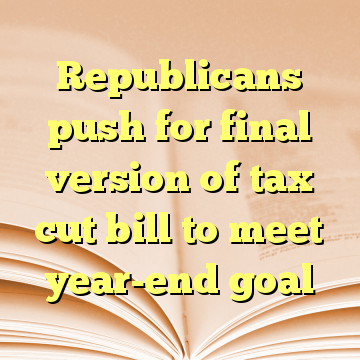 (Worthy News) – Congressional Republicans say they are pressing forward after the Senate passed its $1.4 trillion tax cut bill late last week and that its differences with the House version shouldn’t create major roadblocks in the process as they look to send a bill to President Trump’s desk before year’s end.

The House adjusted its schedule this week so members can vote Monday to formally take the issue to a bicameral conference committee, where a small group of members will hammer out differences between the two versions and produce a final product that can pass in both chambers.

“We’ll be able to get to an agreement in the conference — I’m very optimistic about it,” Senate Majority Leader Mitch McConnell, Kentucky Republican, said Sunday on ABC’s “This Week.” “We think this will make a big difference in getting our economy moving again and providing jobs and opportunity for the American people.” [ Source: Washington Times (Read More…) ]