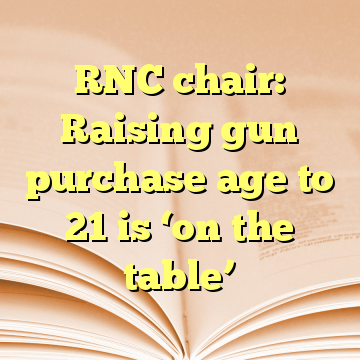 (Worthy News) – Republican National Committee Chairwoman Ronna McDaniel believes that raising the age to purchase a gun from 18 to 21 is “on the table” as Republicans toss out potential legislative ideas in response to last week’s school shooting in Parkland, Fla.

McDaniel said that while the top priority is to increase security in schools and the safety of students, raising the minimum age is something Republicans could support.

“We’re going to see where the conversation goes,” McDaniel told the Washington Examiner. “I think the president’s been very thoughtful in what he’s proposing. He’s listening to these parents. I think universally, we want to make sure our schools are safe. Period.” [ Source: Washington Examiner (Read More…) ]